ADVENTURE OF THE SEAS CRUISE - NOVEMBER 2006

In November 2006 we went on a seven day cruise on the Royal Caribbean ship, the Adventure of the Seas. Our friends Julie and Phil frequently holiday and when they suggested that we might like to go with them on this cruise, we agreed immediately! The holiday started from San Juan in Puerto Rico, and we flew from Heathrow Airport, via JFK New York on Saturday 4th November.
(Photos taken with a Canon Ixus 500 digital camera.) 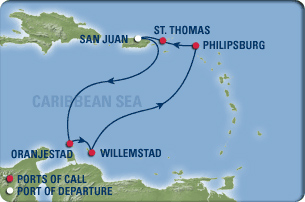 Having spent a restful night at the Caribe Hilton, San Juan, we were relieved to know that Phil's suitcase had eventually arrived after its overnight delay at JFK, and American Airlines were true to their promise in delivering it to our hotel first thing in the morning. We spent the morning visiting an excellent shopping mall at Plaza Las Americas and then arrived to board ship around 3 pm.

Our first day was spent at sea, cruising onboard, which gave us plenty of time to get acquainted with our new surroundings. We berthed at Oranjestad, Aruba at 8 am on the Tuesday morning. Aruba is a Dutch owned island and Queen Beatrix of the Netherlands was on a visit to the various Dutch islands at the same time as we were!

Wednesday saw us arrive at the island of Curacao at 8 am. Again we had a full day to explore and with the help of a taxi had a full and enjoyable day.

Thursday we spend another day at sea, where we indulged in such activities as entering the belly flop competition (Phil) and a round on the putting course. (Julie, Penny and John)

At 8 am on Friday morning we arrived at the port of Phillipsburg, St Martin. This island is also known as St Maarten and is jointly owned by France and Holland, with a border between the north French side and south Dutch part of the island.

Saturday morning saw us berthed at St Thomas and we decided to visit the neighbouring island of St John, both being part of the US Virgin Islands.

We arrived back at San Juan, Puerto Rico at 7 am on Sunday morning. We had scheduled to spend a further night at the Caribe Hilton, before returning to the UK. During breakfast on board, John realised that he had got the dates wrong for his flight home and that this would entail an extra night at San Juan. Luckily there was no problem in staying a further night at the hotel and Julie and Phil went home alone on the Monday, whereas Penny and John had an extra day. This was very stressful, staying in a top class hotel with sea views and nothing to do except sunbathe and have another beer or two!!!!

We had a brilliant holiday, with special thanks to Julie and Phil for being true friends and excellent company.